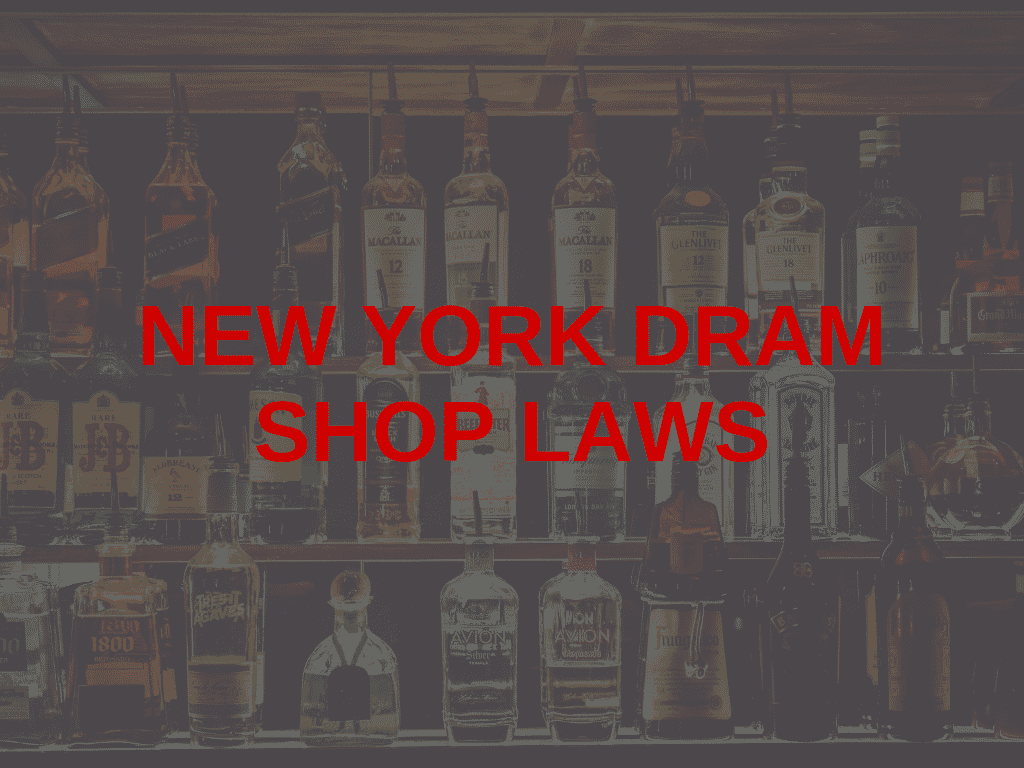 These particular personal injury cases are known as dram shop claims, and the historical reasoning behind this name is because alcohol was once sold in measuring units called drams. New York’s Dram Shop Act is found in the state’s General Obligations Law sections 11-100 and 11-101, and there were many cases throughout the 1990s that helped fully interpret and establish the overall limits of New York’s Dram Shop Act.

These types of cases have now become more prevalent again throughout New York in the past few years, and this article will provide you with a refresher on the intricate details of dram shop cases by looking into third-party liability for alcohol-related accidents, what dram shop laws cover, what plaintiffs must prove, as well as the more subtle nuances that clients and attorneys alike sometimes forget about.

In both these situations the person who is injured in the alcohol-related accident can bring about a personal injury claim against the establishment/party who provided the alcohol, under the following stipulations:

It’s important to understand that alcohol beverage vendors or social hosts are not held liable in New York if they legally provide alcohol to someone 21 or over, even when that intoxicated individual injures someone else due to their intoxication and overall negligence.

But there are many caveats to what constitutes a legal and illegal provision of alcohol, and the illegal conduct that 11-100 and 11-101 set forth is officially defined as, “No person shall sell, deliver or give away or cause or permit or procured to be sold, delivered or given away any alcoholic beverages to (1) Any person, actually or apparently, under 21 years and (2) any visibly intoxicated person.”

A major part of dram shop laws essentially make it illegal for businesses to serve alcohol to anyone who seems visibly intoxicated, and this legal definition of visibly intoxicated is relatively left up to the employee who is serving alcoholic beverages. Some of these signs may be bloodshot eyes, a general lacking in overall physical coordination and slurred speech. We’ll discuss the visible signs of intoxication and the legal implications involved with this tricky part of dram shop laws more below.

One of the more unique aspects of New York’s dram shop laws is that the intoxicated patrons themselves cannot actually sue the business establishment that served them. But in turn, the business defendant could potentially be held liable for the damages that a patron of the business establishment causes to a third party. An example of this would be a bar/restaurant serving an intoxicated individual and then that person drives off and hurts someone, which subsequently could lead to the injured person suing the bar for personal injury contributions.

Dram shop laws also go much further than just vehicular accident, and can include situations like when a bar patron fights or attacks an innocent bystander, or hurts any type of pedestrian. These laws also cover the overall legal prohibition for serving known habitual drunkards as well.

What Must Plaintiffs Prove for a Successful Dram Shop Claim?

If a drinking establishment of any type is to be held liable, then it’s crucial that a plaintiff proves the following:

If a plaintiff can prove all three of these stipulations then the drinking establishment defendant may be held liable for the overall direct actions taken by the patrons, as well as any type of situation in which a patron was part of a party that was connected to an incident that induced a third party injury.

Most courts have been consistent in holding 11-101 of the New York Dram Shop Act to applying solely within the context of alcoholic beverage commercial sales, which is legally defined as the sale of alcohol for profit. There have been dram shop claims denied within certain extenuating circumstances beyond the traditional definition of a commercial sale, including situations like an office social function or an employer allowing their employees to have free alcoholic beverages during their work shifts.

Once a commercial sale is confirmed within a dram shop claim, the determination of the liquor sale as direct or indirect to the tortfeasor is then established. Any type of indirect sale, regardless of the quantity of the sale, makes dram shop liability invalid for a vendor or business.

This is because the New York Court of Appeals has held that a dram shop liability defendant does not have the legal duty to investigate any type of potential consumers of their commercially sold products, but there are further conditions.

A business can be held liable for indirect sales if the tortfeasor was in the defendant’s business with the purchaser of the alcoholic beverages at the time of purchase, provided money to help purchase the alcohol, or even grabbed the bag with the alcohol in it after the sale occurred before leaving the premises.

Visible signs of intoxication are a major part of many Dram Shop Act litigation cases, and this provision typically helps limit the liability of a commercial seller in situations in which there wasn’t a reasonable basis for knowing the extent of a consumer’s inebriation.

Evidence based on the specific times when a tortfeasor was in the defendant’s business/establishment typically is needed in order to satisfy visible intoxication requirements.

The main defenses in this situation are when the defendant didn’t know that minors were consuming alcohol or didn’t authorize the illegal alcohol consumption on their premises, or didn’t provide minors with alcohol.

Fake IDs are also a fuzzy nuance to dram shop laws, but careful ID examination is always legally necessary. Sellers of fake IDs are also never liable under the Dram Shop Act because they aren’t technically selling alcohol to minors.

There also still needs to be evidence that demonstrates an underage bar patron was intoxicated at the time of the eventual alcohol-related incident in order to establish dram shop liability against an establishment, even despite having evidence a minor consumed alcohol at a defendant’s business.

This aspect of dram shop law simply states that there is no liability for a defendant when it comes to an intoxicated patron’s self-induced injuries.

This part of dram shop liability entails how premises owners who lease out their premises to alcoholic beverage selling tenants cannot be held liable in these cases. This is because the owner of a premises doesn’t have the legal duty to control how the patrons or tenants conduct themselves.

How a New York Dram Shop Liability Lawyer Can Help

Each Dram Shop Act case requires an extensive amount of careful analysis to fully understand the circumstances and facts that lead to potential liability evaluations, and Siler & Ingber can help you navigate these complicated laws.

Dram shop actions typically have at least three parties, and this often leads to several conflicts of interest and overlapping claims that make it important to work closely with an experienced lawyer. The attorneys of Siler & Ingber are dedicated to helping victims of all personal injury accidents, no matter how complicated the situations are that lead to an incident occurring.

We work diligently to make sure you’ll recover damages for your injuries, and we’ll help you handle the complicated situations that insurance companies can pose for these complex injuries. Our initial consultations are always free, and we’ll never charge you unless we earn money back for you.